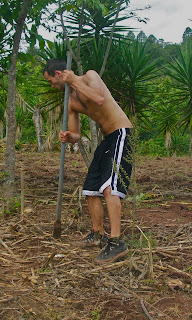 I'm Alex Persky-Stern. Josh Hall, Kyle Barkett and I make up the three-man team that arrived in Honduras on May 24th to work as interns with Unión MicroFinanza (UMF). I'm a Pisces, so as you probably know I'm kind, mysterious, endearing, tend towards dramatic life partners, and enjoy offering micro-financial services to rural farmers (Woolfolk 1992). So that's why I was thrilled when I was offered the chance to come down to Honduras and work with the UMF team for three months, addressing poverty through microfinance and social services in the La Unión region. To give you a sense of the ten days since I first showed my wide-eyed, gringo face around these parts, let's have a quick rundown by the numbers:

0: Times I've shaven. My face is somewhere near the intersection of manly, ugly and lazy, but I've had a great time just not caring.

4: Things I've done that I was completely unqualified for ten days ago. From impact analysis to farming, I've been learning at an exponential rate with no sign of slowing.

17: Times I've heard "Cada Día" by Jesús Adrian Romero. After 4 or 5 plays on repeat at Alicia's (our daily dinner spot, music choice courtesy of Alicia's ~7-year old daughter), I put on a monumental display of patience and persistence to download it myself. I can already tell you it's going to be the theme song of my trip.

Now you might not know what a milpa is. Neither did Josh, so don't worry you're in good company. It means various things throughout Mexico and Central America, but here in La Unión it just refers to a cornfield. Milpas tend to be small with crops going to feed the family rather than for a profit. Gilberto Barrientos is a UMF employee, a La Unión native, and a great guy, so in an effort to help him out and get some personal experience with the life of a Honduran farmer, I and the other interns spent two mornings working on Gilberto's milpa. We hit the fields at 6:30 with piochas (pickaxes) and a big metal pole (see picture), and got to work tilling. The milpa was in a picturesque spot, surrounded by miles of mountains and emerald green foliage. But it was early. And it was hot. And it was hard. Ten minutes in I was sweating bullets and grunting like a caveman. Blisters were growing and getting ripped off faster than you can save money with Geico and my back was breaking. The point is, after just eight hours over two days we were exhausted. I don't know if it's fair to say I gained an understanding of the Honduran farmer's life, because I honestly can't imagine working like that all day every day. However, I certainly did come out with a new appreciation for the work that I'll be doing over the next three months and what it can mean to the people of La Unión.

Posted by Aldea Development at 7:13 AM