At UMF, we believe that transparency is better than any particular certification. For this reason, we are proud to present our second annual Transparency Report, detailing all pricing for the coffees that we purchased from farmers in the 2013 coffee harvest. This report details how much coffee we purchased, which farmers we purchased from, what prices we paid directly to these farmers, and how to compare these to numbers reported by Fair Trade or direct trade coffees that report FOB pricing.

Farmers in La Unión were hit doubly during the 2013 harvest, with large losses resulting from coffee leaf rust and prices dipping to three year lows when farmers were ready to sell coffee. Although most coffee buyers, including Fair Trade Certified coffee, dropped prices with the falling market price, UMF made the decision to maintain prices from the 2012 harvest. If the coffee is as good this year as last, why would we lower the amount of money that we pay to purchase it? This year, our average green coffee purchase price was $2.54 (it was $2.48 in 2012) and our average parchment purchase price was $1.59 (it was $1.81 in 2012). Over the same time period, the coffee market price dropped 73%.

We encourage you to read this Transparency Report and ask questions. There are many companies and organizations around the world that claim to be helping farmers through the prices they pay for coffee, including ourselves. Without transparency, it is impossible for you, the consumer, to make informed decisions. Once you have read our transparency report, look for transparent information from other socially conscious coffee companies so that you can make an informed decision on what you buy for your morning cup.

How we pay farmers

Among the numbers you will see below is the price that UMF paid for parchment coffee, or coffee with the shell still attached (this is how the vast majority of farmers sell their coffee). UMF and coffee farmers signed contracts in La Unión at the time of purchase, and these contracts show the total amount paid to a farmer for his or her coffee. The parchment coffee price is the amount of money paid directly to the farmer, divided by the amount of coffee sold to us, and it is the most transparent representation of what farmers received for their coffee.

To make comparison easier, we also translate this number into an amount paid to farmer per pound of green coffee as well as FOB pricing. FOB pricing is the most common number given by companies who report what they pay for coffee. However, this number includes shipping, preparation, and taxes that was NOT paid to the farmer. This number is different for every coffee but, as seen below, was an average of $0.41/lb green for the coffees that we purchased during this harvest.

To learn more about how this parchment price differs from prices quoted by Fair Trade and other exporters, read our 2011-2012 Transparency Report.

The Basics
UMF received and cupped 86 different coffees from 47 different farmers in the 2013 harvest. From these candidates, we selected and purchased the best 50 coffees from a total of 33 farmers. Eleven of these farmers participate in UMF’s microloan and training programs. In all, we purchased a total of 67,284 lb of parchment coffee from farmers. Next, we sent the coffee to a processing center in Honduras to remove the parchment and prepare it for exporting. This left us with 42,408 lb of green coffee, ready to be exported to the United States and sold.

The smallest amount of coffee that we purchased from a farmer was 103 lb of parchment coffee, and the largest amount was 5,201 lb of coffee. The highest price that we paid was $1.78/lb parchment, and the lowest price paid was $1.38/lb parchment. As a comparison with Fair Trade Certified prices, the highest FOB price we paid was $3.72 and the lowest FOB price paid was $2.43. For reference, the Fair Trade Certified FOB coffee price this harvest was between $1.60 and $1.78 the past year.
The Numbers
Here is UMF’s 2012-2013 coffee transparency information:


A note for the blends: the price per pound green to farmer and the FOB price are estimates because the coffees are mixed prior to processing. However, the parchment price is exact for each farmer’s coffee in the blend. The bolded prices for the blends give the average for the entire blend, and the bolded number for total exported represents the weight of the entire blend.

Contracts
Below, we’ve posted a sample contract to show how we purchase coffee from farmers (we’ve removed from the sample the part of the contract that includes personal financial details). The main parts of the contract are explained here:

•  Cantidad (Amount): The amount of parchment coffee we purchased in qq, or quintales. (One quintal is 100 lb.)

•  Oferta (Offer): The rate we offer for each carga of coffee. (One carga is 200 lb, and the price is listed in the Honduran currency: Lempira. 1 USD ~ 20 Lempira depending on daily exchange rate) 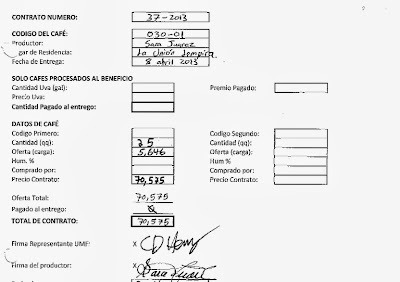 For a glossary of terms in the transparency report, and to view last year's numbers, visit our 2011-2012 Transparency Report.
Posted by Aldea Development at 8:12 AM 27 comments:

It has been just over a month since our initial sampling and treatments in the coffee leaf rust experiment that we are running here in La Unión (for the basics, read here). We have applied all organic treatments twice, all conventional treatments once, and have just finished looking at the data from one month in.

So what did we see?

First, the conventional treatments: Although Alto 10 poses health and environmental hazards, it is hard to dispute its effectiveness. Of all the treatments, it is the only one that showed a decrease of rust incidence in all measured severity factors. Silvacur, the other systemic fungicide we are testing, showed a slowing of rust development, but didn’t show a decrease in the measured severity. Copper, the final conventional treatment, did not show significant initial results. However, this is logical, since copper is a preventative treatment whose effects are more likely to be seen over a longer time period.

Now, the organic treatments: When compared to the copper trial, milk whey showed a slight decrease in infected leaves, number of spots, and coverage area of rust. However, these decreases are relatively small and could still be attributed to random error. Sodium Bicarbonate showed a decrease in all areas when compared to copper. However, these decreases are also relatively small and could also still be attributed to random error.

And finally, the madrifol  treatment: Of all of the areas, this treatment is perhaps the most confusing. Upon initial analysis, it appears that there was a large increase in the number of rust spots in this plot. However, it was observed that two of the five treated plants appeared to have decreased rust incidence, while the other three showed significant increases in rust severity.

We separated out the two trees that have normal spacing and found a decrease in both coverage and spot size, suggesting that madrifol may actually interrupt the development of rust spots, but only with proper spacing and pruning.

We are continuing to apply both organic and conventional treatments on the test farm. We will take the next sampling in another 30 days, and we will keep you updated on the progress of the experiment.
Posted by Aldea Development at 7:32 AM 29 comments: