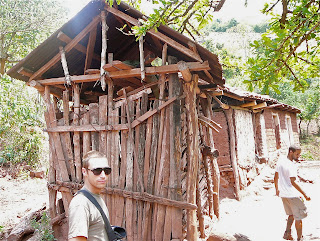 After three weeks of being in La Unión I’ve grown accustomed to the lifestyle. From the amenities (or lack thereof) to the daily overdose of Coca-Cola, Honduras has really grown on me. But beyond daily life, nothing has impressed me more than the people, and last Friday put it over the top. We (Daniel, the other two wisecracking interns, and myself) went out to one of the local “aldeas” that UMF serves, and we had our first opportunity to speak to local farmers personally. I would start by saying it was insightful, informative, and even touching, but one must have been there to see the emotions in the eyes of the producers as they described their experiences with UMF: grateful simply does not do it justice.

The aldea we visited is called San Agustín and it’s about a two-hour walk to get there. To give you an idea of how secluded and removed it actually is, there is no running water, nor electricity, and the local school teaches up to third grade. The producers we talked to are named Domingo and Marcos. Before we went, Daniel asked us to prepare some questions in case the conversation came to a lull—they were not really necessary as these gentlemen were full of excitement and ready to share.

We started the conversation off casually by asking about their families and how long they have lived in San Agustín, but they first responded by welcoming us to their homes and thanking us for coming out to visit them—see what I mean about the hospitality? We talked about the program and how they like it, what kinds of differences they see in their personal lives, and asked them about suggestions for possibly making the program better. Marcos was very responsive and typically answered the questions we had prepared before we even got around to asking them. Personally, the best part of the conversation was when I asked Marcos if he had a dream he hoped to accomplish within the next couple of years and what UMF is doing or can do to help. Without hesitation, his response was that he wanted the next generation of the Adalid family to have it better than he did: to send his daughter to school. He wants to produce enough to afford a good education for her, and with the help of UMF, Marco’s dream is completely possible.

I came down here knowing Honduras had problems. I knew the government was incapable of providing social services and poverty trapped people by the millions. I also knew that I would not be able to accomplish everything I wanted to (pretty much everything just short of curing cancer) but rather that I would have to go home knowing I made some kind of difference, however small it was. But after this conversation, I feel enormous. It’s apparent that I am making a difference, even when I’m filing loan documents in the office. In nine weeks when I go home, I will know that I did my part to send Rosa Adalid to school—to help her get the education that her father was deprived of.

Posted by Aldea Development at 8:07 AM