Charlie Heins is the newest member of the Unión MicroFinanza (UMF) team; he became the Manager of Finance in October of 2010. However, before I get started on Charlie, I am going to reference an excerpt written by UMF team member Mike De Wit. This quote demonstrates the immediate impact that Charlie had on the organization: 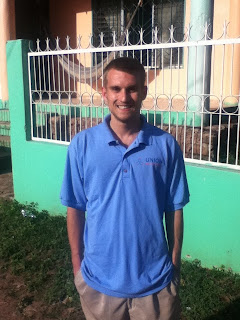 “Not even two weeks ago, the UMF Honduras team was joined by a new member, Charlie Heins. And with not even two weeks of being part of the team, Charlie has become a significant help. In particular, he has taken an interest and shown great initiative in developing our accounting department. Being former accounting point man, I take a sigh of relief, as I no longer dread the amount of work it would have taken me to properly fill out next year's Federal accounting/tax filings! The reason for this is, as opposed to my degree in accounting from the 'Honduras Business School of Hard Knocks,' Charlie formally has a degree in accounting from the Seidman College of Business at Grand Valley State University. That means, in a matter of days, a workable UMF accounting system has become an exceptional, easy to navigate and efficient system. Indeed, there are many, many other people who deserve recognition for what they've done for us, but Charlie has recently been the most
immediate.” -Mike De Wit-

Since then Charlie has taken the entire UMF financial system and revamped it so that everything can be calculated down to the exact penny. It may not be the most glamorous job in the world, but it is invaluable to the organization to have him doing this work for us. Many organizations may have passion and great ideas, but at the end of the day it is the numbers that matter. Knowing the numbers provides the building blocks for vision and is the key to being accountable and transparent. Charlie allows us to do this.

Charlie was introduced to La Unión, Honduras long before he knew he would use his accounting skills to bring prosperity to the region. He was first introduced in 2005 on a mission trip, planned through an organization called International Aid, to build stoves in an impoverished mountain village named Quiscamote. For Charlie it was a humbling and life changing experience that he never forgets. While much was accomplished that first trip to Honduras, he always hoped to return in the future. Years later, he heard about UMF and asked to join the UMF team so he could again travel to Honduras and continue helping the disadvantaged people
he had met in 2005.

In his own words Charlie states, “I look forward to contributing to UMF's future success. Whether I'm handling financials or working in another position, I will bring my positive attitude and hard work ethic to any task I'm assigned. With help from our supporters, UMF will build a bright future for rural poor and establish lasting relationships within the communities we work.”
-Carlos-

And that is Charlie Heins: the Man of Meticulous Numbers, and the Invaluable.

Posted by Aldea Development at 6:34 AM