The Definition of Savings in La Union: Part I 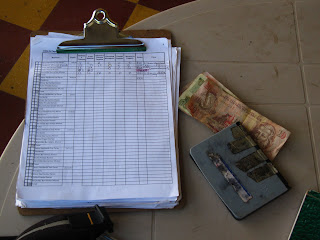 Yesterday, I had a several hour conversation with Gilberto and Martir about financial planning and what people in La Unión do to plan, budget, and save money. It started because we wanted to ask new loan applicants the question “If you wanted to make a small investment of 1,000 Lempira ($50 USD), how long would it take you; right now, a few months, the next harvest, or never?” We wanted to ask the question in order to gain a better understanding of how people in the area manage their money. “Patrick,” Gilberto said, “This question is going to seem very odd if you ask people. No one has money set aside right now? Everybody will have to wait until the harvest.” From here we began discussing what people do to save money.

The short, and somewhat disturbing explanation, is nothing. I was told that there is a saying here “dinero ganado es dinero gastado” or “money earned is money spent”. When people make money – almost exclusively during the coffee harvest – they spend it immediately. As Martir said, if he has 10 Lempira and his Aunt comes by selling bread (which he knows is delicious), he is going to buy it. This is not to say that it all is wasted, since I was told that money often goes to new clothes, housing repairs, medicine, and other worthwhile purchases. However, it means that shortly after the end of the coffee harvest, all of La Unión and the towns around it are collectively broke for the rest of the year. This is the reason that fertilizer is so difficult to buy in May and September – people have been unable to save the money they need for inputs in the many months between the harvest and the following growing season. Additionally, what happens when a roof starts to leak? What happens when a child gets sick? Unfortunately, there is no good solution for people. For extreme emergencies, people can go to neighbors and ask for small amounts of money, to be paid back when possible. For less urgent matters, the only realistic option is to hope that it can wait until the next coffee harvest. This leaves little possibility for fertilizer or agricultural products, since all people in the area need them at the same time.

So why don’t people save? This is a difficult question, but here are my thoughts. First, there is a lack of knowledge. People know that saving is a good idea, but don’t know how, where, or exactly why to save. They know that it is hard when they have no money for emergencies, but see this as an unavoidable way of life – like daily rainstorms – that cannot be changed. Second, there is a lack of facilities. The nearest commercial bank is a 3 hour, 80 Lempira ($4 USD) bus ride away. Since most people wouldn’t be able to deposit more than 40-50 Lempira (~$2.50 USD), they would spend significantly more on food and transportation than they would be able to put in the bank. Third, there are several community groups which have been set up to provide savings, but these are plagued by stories of mismanagement, burglary of houses in which money was kept, to straight out robbery by community bank treasures. Overall the outcomes have been poor.

It is important to realize that these reasons are different than saying that people are not CAPABLE of saving. Right now, UMF clients are making interest payments of 10-20 Lempira ($0.50-$1 USD) at each biweekly meeting for exactly this reason. People CAN save small in amounts, are capable of depositing those small amounts every few weeks. Our current 99% repayment rates are proof of this. With the proper training and facilities, La Unión wouldn’t have to scrape by for nine months out of the year. But how can this be done? Well, that is a lesson for another day.

Until next time, adios.